This is war, General, But not as we know it!

This is war General! But not as we know it...

Rift tech runs riot ! At Schloss Wolfenschwanz the evil German Scientists have been creating all sorts of horrific forms of wunderwaffen (wonder weapons)

Even the ordinary doberman was not spared, modified into vicious semi-robotic dogs, they stream out of the lair of Darkness. 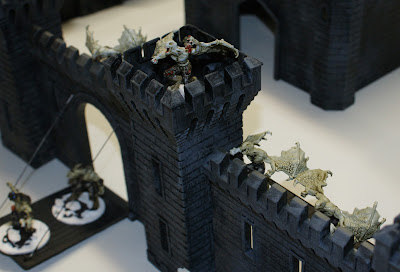 A spearhead of Yankee soldiers stumble upon this nest of vipers. Taken aback by the sheer horror of what faces them, they never the less press forward; not shy to put their own rift-tech to the test.

"Crank up the Teslas, Captain!" 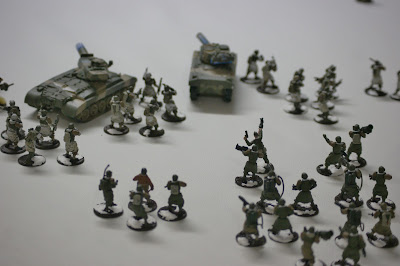 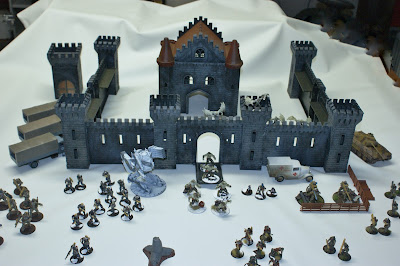 To stumble upon a citadel of evil - castle of Schloss Wolfenschwanz, where German scientists have been meddling with the occult, reanimating dead soldiers, and modifying them to fight the Amis. 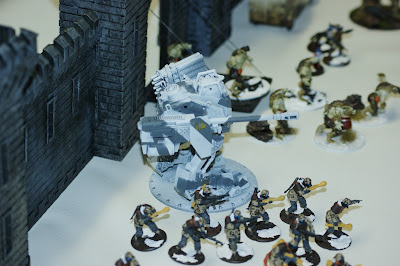 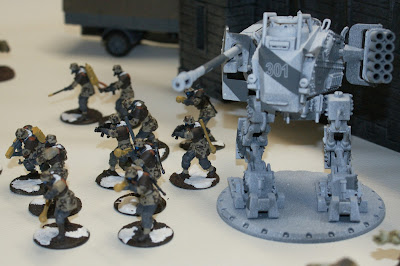 The castle garrison is supported by a Kampflaufer mech sporting an 88m gun and a barrage of nebelwerfer rockets. 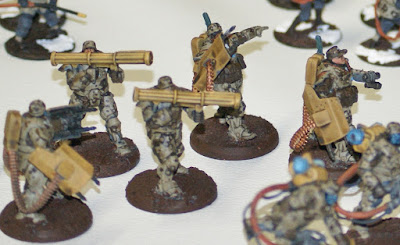 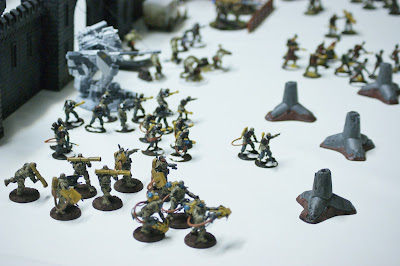 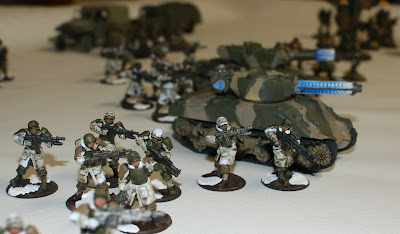 Through the mists loom the first of the American armoured units: Sherman and Pershing tanks modified to carry the new Tesla cannon 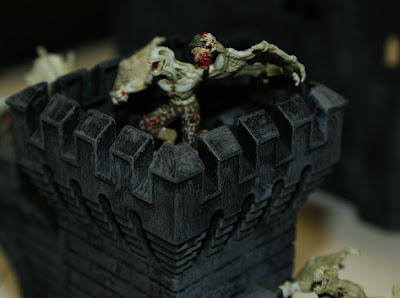 Nachtjaeger appear on the castle ramparts, signalling the unleasing of the schreckwaffen (shock/horror weapons) 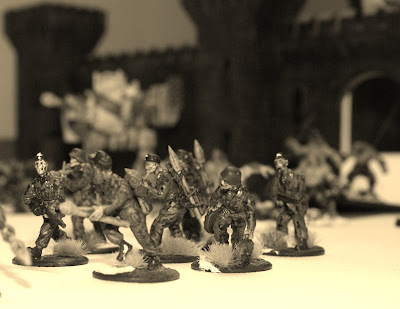 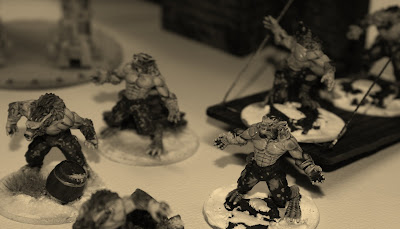 and Schreckwulfen, that stream out of the castle gates, rabid with blood lust 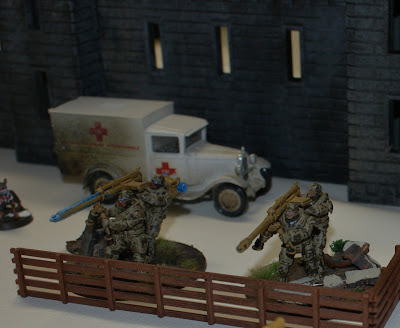 Rift-tech recoilless guns at the ready to take on the Amis.
Who would even have thought that you could some day shoulder an 88! 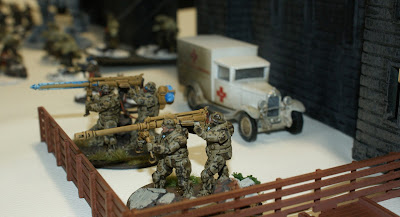 The Krankenwagen (Ambulance) warms up its engine. The Amis will provide the Herr Professor with many new corpses to experiment on. The next lot will have to face their own undead countrymen! 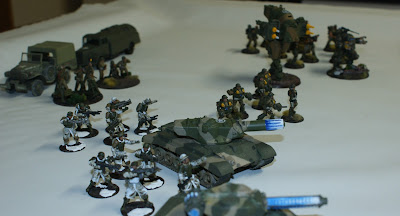 The German Army as the US has never seen them before. So they thought the war was over... 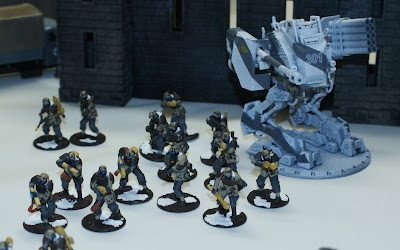 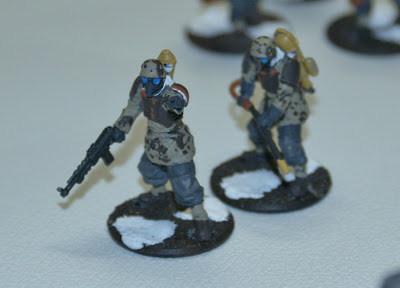 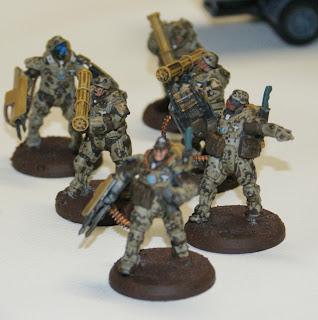 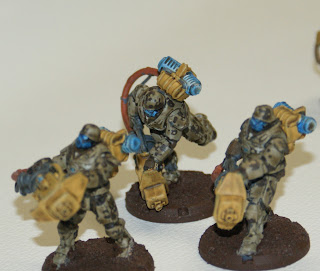 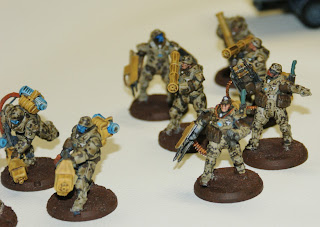 Mind you though, the Gods of War have been even-handed. The US has its own rift-tech innovations. 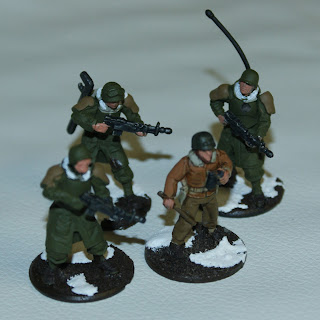 "Tell me about it, Captain! 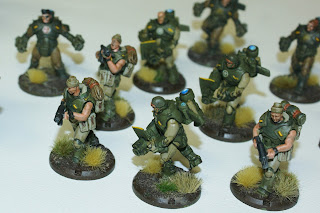 " Our Firefly paratroopers  are about to take flight. They will scale those castle walls with ease!" 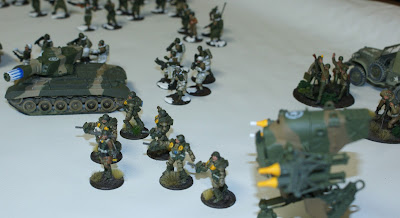 "And we have our own walkers, sir!" 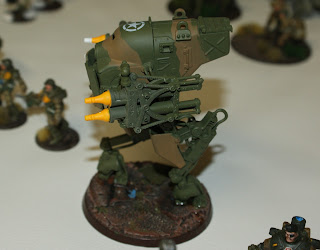 "The Jackcal can jump with the fireflies. "
"Imagine their surprise when this baby lands inside their walls!" 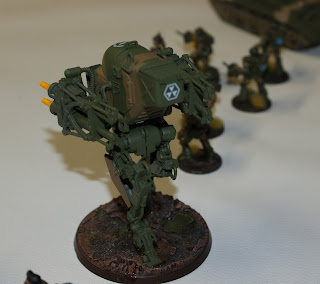 "...and we have support from heavy mortars" 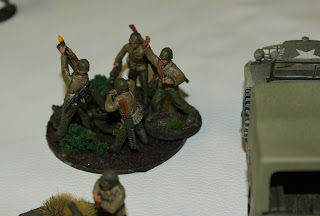 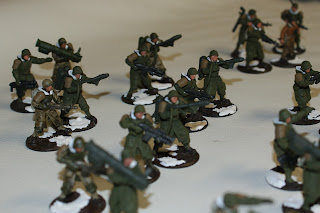 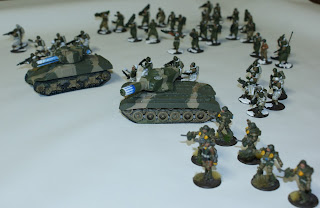 I am loving how I can now integrate my Dust Tactics figures and armour with my Bolt Action to play Konflik 47. Just relishing it!
Developing a weird war horror castle siege scenario. Looking for 3 more players. I'm happy to play either side, as I have troops for both. Any takers?