Of Saukopfs and  StuG IIIs On the StuG and the pig's head or pig's snout mantlet:

The Stug III began its life as an infantry support vehicle . It went through quite a few changes during its production run .It began its career in the Battle of France and was used right up to the last days of the war.

Prototype manufacture was done by Alkett, which produced five prototypes in 1937 on Panzer III Ausf. B chassis. These prototypes featured a mild steel superstructure and Krupp’s short-barreled 75 mm StuK 37 L/24 cannon. Production vehicles with this gun were known as StuG III Ausführung (version) A to E.

The StuGs were organized into battalions (later renamed "brigades" for disinformation purposes) and followed their own specific doctrine. Infantry support using direct-fire was its intended role. Later there was also a strong emphasis on destroying enemy armour whenever encountered.
As the StuG III was designed to fill an infantry close support combat role, early models were fitted with a low-velocity 75 mm StuK 37 L/24 gun(Kurz)  to destroy soft-skin targets and fortifications. After the Germans encountered the Soviet KV-1 and T-34 tanks, the StuG III was first equipped with a high-velocity 75 mm StuK 40 L/43 main gun (Spring 1942) and in Autumn 1942 with the slightly longer 75 mm StuK 40 L/48 gun.(Lang)  These versions were known as the Sturmgeschütz 40 Ausführung F, Ausf. F/8 and Ausf. G.

When the StuG IV entered production in late 1943 and early 1944, the "III" was added to the name to separate it from the Panzer IV-based assault guns. All previous and following models were thereafter known as Sturmgeschütz III.
The Stug G began production in December of 1942 and was used more and more as an anti tank weapon .
The cast mantlet was introduced in production in November 1943 in StuG III Ausf. G production, but StuG IIIs with the bolted "box" mantlet continued in production until the end of the war as production of the cast mantlet was insufficient to cover all of StuG production.  StuG IV production started in December 1943.
It was used on the StuG III Ausf. G, StuG IV and StuH. from November 1943 to the end of the war.
The saukopf mantlet began to appear in November of 1943,but never completely replaced the welded mantlet which was seen till the end of the conflict just because of the production requirements. The official  name for this new mantlet was Topfblende,but was commonly know as the saukopf by the crews, as it resembled a pig's head or snout.


So the answer to the question: "Which model of the Stug used the Saukopf mantllet?
The cast gun mantlet was used on

but never on StuG III from Miag. So that is the reason the bolted mantlet was used up to the end of the war


While the StuG III was considered self-propelled artillery it was not initially clear which arm of the Wehrmacht would handle the new weapon. The Panzer arm, the natural user of tracked fighting vehicles, had no resources to spare for the formation of StuG units, and neither did the infantry branch. It was agreed, after a discussion, it would best be employed as part of the artillery arm. The vehicles of the Sturmgeschütz series were cheaper and faster to build than contemporary German tanks; at 82,500 RM, a StuG III Ausf G was cheaper than a Panzer III Ausf. M, which cost 103,163 RM. This was due to the omission of the turret, which greatly simplified manufacture and allowed the chassis to carry a larger gun than it could otherwise. By the end of the war, ~11,300 StuG IIIs and StuH 42s had been built

Overall, Sturmgeschütz series assault guns proved very successful and served on all fronts as assault guns and tank destroyers. Although Tigers and Panthers have earned a greater notoriety, assault guns collectively destroyed more tanks. Because of their low silhouette, StuG IIIs were easy to camouflage and a difficult target. Sturmgeschütz crews were considered to be the elite of the artillery units. Sturmgeschütz units claimed to have knocked out 20,000 tanks by 1944. As of April 10, 1945, there were 1,053 StuG IIIs and 277 StuH 42s in service.

The StuG assault guns were cost-effective compared to the heavier German tanks, though in the anti-tank role they were best used defensively, as the lack of a traversable turret was a severe disadvantage in the assault role. As the German military situation deteriorated later in the war, more StuG guns were built compared to tanks, to replace losses and bolster defenses against the encroaching Allied forces.

StuG III prototypes (1937, 5 produced on Panzer III Ausf. B chassis): By December 1937 two vehicles were in service with Panzer Regiment 1 in Erfurt. Vehicles had eight road wheels per side with 360-millimetre (14 in) wide tracks, 14.5 mm thick soft steel superstructure and the 7.5 cm StuK 37 L/24 gun. Although not suitable for combat, they were used for training purposes as late as 1941. StuG III Ausf. B: (Sd.Kfz 142; June 1940-May 1941, 300 produced by Alkett) Widened tracks (380 mm). Two Rubber tires on each roadwheel were accordingly widened from 520x79mm to 520x95mm each. Both types of roadwheels were interchangeable. The troublesome 10-speed transmission was changed to a 6-speed one. The forwardmost return rollers were re-positioned further forward, reducing the vertical movements of the tracks before they were fed to the forward drive sprocket, and so reduced the chance of tracks being thrown. In the middle of production of the Ausf. B model, the original drive sprocket with eight round holes was changed to a new cast drive sprocket with six pie slice-shaped slots. This new drive wheel could take either 380 mm tracks or 400 mm wide tracks. 380mm tracks were not exclusive to new drive wheels. Vehicle number 90111 shows older drive wheel with wider 380mm tracks. StuG III Ausf. E: (Sd.Kfz 142; September 1941-February 1942, 284 produced) Superstructure sides added extended rectangular armored boxes for radio equipment. Increased space allowed room for six additional rounds of ammunition for the main gun (giving a maximum of 50) plus a machine gun. One MG 34 and 7 drum-type magazines were carried in the right rear side of the fighting compartment to protect the vehicle from enemy infantry. Vehicle commanders were officially provided with SF14Z stereoscopic scissor periscopes. Stereoscopic scissor type periscopes for artillery spotters may have been used by vehicle commanders from the start.

StuG III Ausf. F/8: (Sd.Kfz 142/1; September–December 1942, 250 produced) Introduction of an improved hull design similar to that used for the Panzer III Ausf. J / L with increased rear armor. This was 8th version of Panzer III hulls, thus the designation "F/8." This hull has towing hook holes extending from side walls. From October 1942, 30 mm thick plates of additional armor were bolted on to speed up the production line. From F/8, the 7.5 cm StuK 40 L/48 gun was standard until the very last of the Ausf. G. Due to lack of double baffle muzzle brakes, few L/48 guns mounted on F/8 were fitted with single baffle ball type muzzle brake found in Panzer IV Ausf. F2/G.

StuG III Ausf. G (Sd.Kfz. 142/1; December 1942– April 1945, ~8423 produced, 142 built on Panzer III Ausf. M chassis, 173 converted from Panzer III): The final and by far the most common of the StuG series. Upper superstructure was widened: welded boxes on either sides were abandoned. This new superstructure design increased its height to 2160mm. Backside wall of the fighting compartment got straightened, and ventilation fan on top of the superstructure was relocated to the back of fighting compartment. From March 1943, driver's periscope was abandoned. In February 1943 Alkett was joined by MIAG as second manufacturer. From May 1943, side hull skirts (schurzen) were fitted to G models for added armor protection, particularly against Russian anti-tank rifles,it is also useful against hollow-charge ammunition. Side skirts were retro-fitted to some Ausf. F/8 models, as they were be fitted to all front line StuGs and other tanks by June 1943 in preparation for the battle of Kursk. Mountings for side skirts proved inadequate, many were lost in the field. From March 1944, improved mounting was introduced, as a result side skirts are seen more often with late model Ausf G. From May 1943, 80mm thick plates were used for frontal armor instead of two plates of 50mm+30mm. However, backlog of completed 50mm armors exited. For those, 30mm additional armors still had to be welded or bolted on, until October 1943.

A rotating cupola with periscopes was added for the commander for Ausf G. However, from September 1943, lack of ball bearings (resulting from USAAF bombing of Schweinfurt–Regensburg mission) forced cupolas to be welded on. Ball bearings were once again installed from August 1944. Shot deflectors for cupolas were first installed from October 1943 from one factory, to be installed on all StuGs from February 1944. Some vehicles without shot deflectors carried several track pieces wired around the cupola for added protection.
From December 1942, a square machine gun shield for the loader was installed, allowing an MG 34 to be factory installed on a StuG for the first time. F/8 models had machine gun shields retro-fitted from early 1943. The loader's machine gun shield was later replaced by rotating machine gun mount that could be operated by the loader inside the vehicle sighting through a periscope. On April 1944, 27 of them were being field tested on the Eastern front. Favorable report lead to installation of these "remote" machine gun mounts from the summer of 1944. Later G versions from November 1943, were fitted with the Topfblende pot mantlet (often called Saukopf "Pig's head") gun mantlet without coaxial mount. This cast mantlet with organic shape was more effective at deflecting shots than the original boxy mantlet armor of varying thickness between 45mm and 50mm. Lack of large castings meant that the trapezoid-shape mantlet was also produced until the very end. Coaxial machine gun was added first to boxy mantlets from June 1944, and then to cast Topfblende from October 1944, in the middle of "Topfblende" mantlet production. With an addition of coaxial, all StuGs carried two MG 34 machine guns from fall of 1944. Some previously completed StuGs with boxy mantlet had a coaxial machine gun hole drilled to retrofit a coaxial machine gun, while Topfblende produced from Nov. 1943 - Oct. 1944 without machine gun opening could not be tampered. Also from Nov.1943, all metal return rollers of a few different types were used due to lack of rubber supply. Zimmerit anti-magnetic coating to protect vehicles from magnetic mines were used from September 1943-September 1944 only. 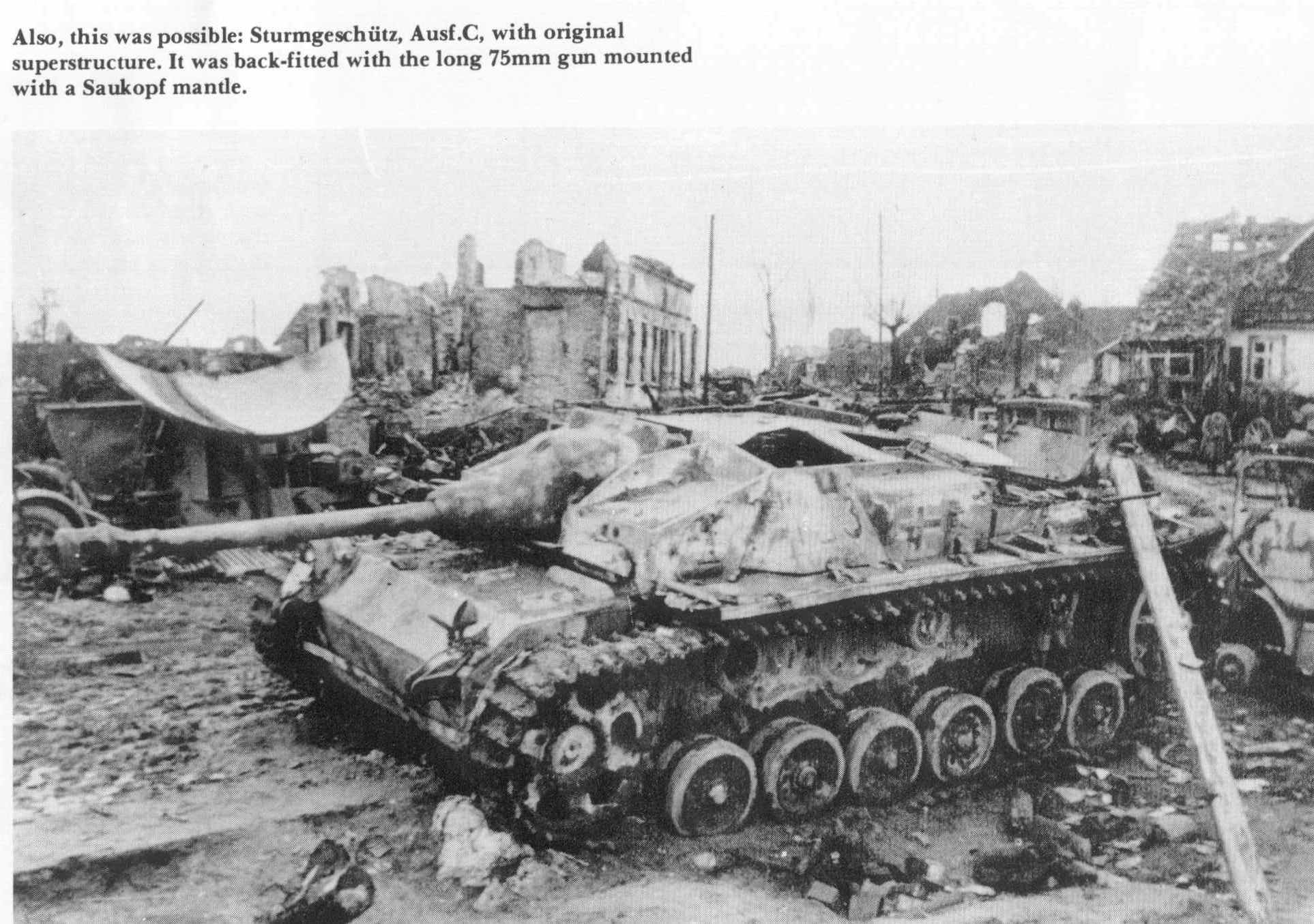 At the beginning of December 1942 an experimental production of a flame-thrower version of the StuG III was begun. Ten test vehicles were constructed in all.

Instead of a main gun an ejection tube with an inside diameter of 14 mm was installed This allowed a flammable mixture to be blown down the barrel by a  pump connected to a two-stroke DKW engine.
The device was able to spew flammable material over a distance of 55 meters.

All the prototypes were sent to the Panzertruppenschule I for testing in June 1943. The Flame-StuG never made it into production and the ten experimental machines were eventually converted back to standard assault guns between January and April 1944. No Flammenwerfer Stug was ever operationally deployed.

Posted by Herman van Kradenburg at 03:35