Flames of War in 20 mm. Second or third FoW game for Laurie, ably assisted by David, and visitor (and  potential new member) Tielman, ex Frankfurt am Main in Germany (Impartial observer, but obviously an experienced gamer) 22 June 1944: A German Panzer Comapny meets up with a Russian Tankovy suppported by a small Motostrelkovy.

2 pre-prepared 1000 points lists:
I roll to get the Germans, Laurie to command the Soviets.

Germans field a Panzer IV unit, 4 Panzer IV Gs and a command section with the Major and the 2 IC in similar tanks and a recovery SdKfz 11;  KWK 75mm long guns, 2 Reconaissance  Armoured cars: 2 Pumas with 50 mm KWKs, 3 Stug Gs, one with saukopf mantlet (Thanks Scott, nice and easy way to distinguish troop commander) and 2 with square mantlet. 2 x Pak 40s. No more points left after that :(
Germans are confident veterans of the Ostfront.

Russkis have Command and 2-IC in T-34 Obr 1942's, another troop of 5 x T-34s, and a separate troop of 6 Sherman lend-lease tanks. Mortar section with 4 x 120 mm heavy mortars; and the Motostrelkovy with 2 Maxim HMGs. Kommissar to invigorate the somewhat reluctant infantry. Russians are confident trained

Laurie rolls, and elects that I deploy first.

Terrain
We have an open rolling pastoral landscape, some where east of the Dnieper river. (So 9th German Army and 9th Russian Tank Corps elements coming head to head, leading up to the large clash at Bobruisk. (!st Byelorussian Front) Pripyat (Pripet) Marshes do not feature (yet):

A single farm-house with two small wheat fields at the centre of the table, a small copse of fir trees to the north and south, and a low hill to the west. A chance engagement, with both forces vying for the farmhouse, with an unsubstantiated  rumour that went round that an attractive farm-girl who brews her own Vodka resided there...

The Panzerspaeh unit deployed first, off to the southern edge of the table. Knee-jerk response from Generalski Laurie saw the 6 Shermans deployed to cover the flank. The Germans then deployed 3 stugs threatening their flank in return.
Russians deployed their T34s on the Northern flank. Germans set 2 x Pak 40s in the centre of their lines, with direct lines of sight to T34 unit.

Let's take out the soft armoured cars first! Then we take the woods.

The soviet mortars took position on the far left corner, with observers in the woods. German command tanks parked behind the Pak 40s, able to strike left or right, depending where the threat came from.

Russian commander sought to bolster the numbers of his T-34 force, and followed in the furrows ploughed by the lead tanks. Russian Motostrelkovy deployed amongst the Sherman tanks, set to take the objective in the forest between them and the Pumas. Last to deploy were 4 Zis-3 AT guns, straddling the centre of the board on the Russian side. The bulk of the farm house interfering with line of sight to the Pak 40s (phew!)

Genl. Lauriski goes first: Shermans roll forward, and take a bead on the Pumas. Being recce vehicles they decide that discretion is the better part of valour. Or so they thought: Out of the frying pan and into the fire. Well, sort of. One vehicle was able to scoot behind the low hill and out of sight, but the lead armoured car went too far, and exposed himself to the line of fire of the rear-most Sherman. Fatal mistake. Mortars range in on the Pak40s, succeed in dropping their 120 mm ordnance, but failing to do any damage.
Not so the T-34s. The two PzKfw IVs go up in flames. The Russians artillery fails to do any damage, and their unit commander radios for the Kommissar to come over.

The Germans are infuriated by the loss of their beloved PzKfw IVs, the troop commander fires off two rounds, two hits, and two T34s go up in smoke. "See Ivan, this is what Krupp Steel does !"

The Pak 40s follow suit, and soon 4 T-34s in total are blazing hulks. The hot-headed junior officer in the Puma is encouraged by the success of the artillery, and charges into the flank of the Sherman unit, quite foolishly. He pumps two shots into the nearest Sherman's flank, destroying it. In his urge to avenge his colleagues he ends his game turn hopelessly exposed.

The grizzled veteran Heer stug commander shrugs. "Must have a throat ache !" (Wehrmach slang for a desire to obtain the knight's cross, worn at the throat) A volley of 6 armour piercing 75mm shots from the StugGs, and several Tommy Cookers live up to their names, except in this case it is Ivan receiving the heat, not Tommy.

Turn 2 sees the Motostrelkovy take the objective in the woods on the back of the Sherman thrust; without firing a single shot, and the Shermans turn their attention to the isolated Puma and the Stugs, destroying the Puma outright. The Ritterkreuz was bestowed posthumously on Leutnant Brasch. The low profiles of the Stugs and having to shoot through the woods makes life difficult for the Russian gunners. Shots hit, but fail to do any damage. Another dismal performance from the artillery.

Mortars again make up for the lack of efficacy from the Zis 3s, and destroy the observation team for the 75mm guns.Glancing shots hit the Command Unit's tanks, they bale out, but remount in their turn.The remaining panzer fails its morale test, and flees off the table to warn the OKW about what is happening.

Germans counter-attack, with the Stugs wiping out the Shermans, and the Pak 40s sowing sorrow among the T-34s, destroying them to the man, commander included. The Soviets will have to start taking company morale tests!

Soviets pass their first company morale check, and turn to their artillery to finish the job. It appears the artillery have finally found their mark! Maybe the threat of the Kommissar increased their zeal, or was it the sight of 2 PzIVs barrelling down on them ? Blam goes the SdKfz 11  recovery vehicle of the command platton

Two stugs go up in flames, a Pak 40 is lost, and the gunnery command team too. The Strelkovy prefer sit on their objective in the woods, smoking those black Russian cigarettes with the acrid smoke...

The German turn sees their command unit making a bee-line for the farm-house, trying to shelter from the Zis 3 guns. The stug makes double time to get to the second objective. By hook or by crook...

A war of attrition ensues. Ivan hits and bails both the command panzers. The Pak 40 survives, but the Stug is also bailed. Looking pretty grim for the Germans. "Ach Hans, I could see the Liebling with the Vodka!"

The Stug crew successfully remounts, but both the PzIV remain bailed. Looks like the writing is on the wall...

Lauriski rolls his company morale test: a 1!
No! The Soviets crumble and run ! Apparently they had enough. I suspect some harsh words and actions will follow from Herr Kommissar, Ja?

An epic slog-fest, and a very enjoyable game.

At the weekend I obtained a turret-less 234 matchbox body at the KWC swap meet, that I intend to convert to a 234/1 command vehicle. The body has already been undercoated in grey, and I'm working on the open top turret. The two 234/2s with the 50mm gun in the turret have already been painted in the grey/dark green camo of the rest of my force and given a wash or two to weather them.

It was a strange sense of familiarity to hold the Matchbox kit and box in my hands again after 30-odd years. Funny how the brain works... 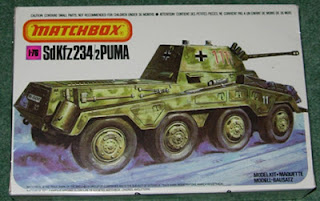 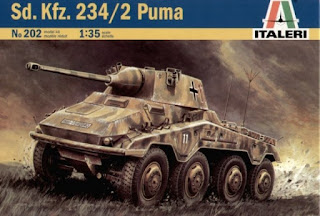 Quite a difference in size between the two kits. The matchbox may actually be 1/76.
Lower on it's chassis too (But maybe that's just that my modeling skills have improved over 30 years)

Someone else's interpretation of the 234/1 to inspire my scratch-building the turret. 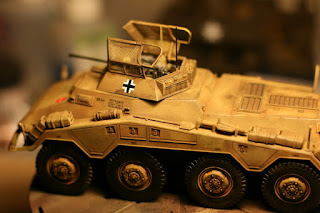 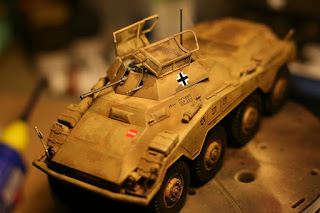 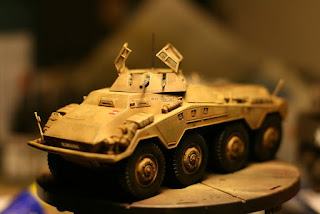 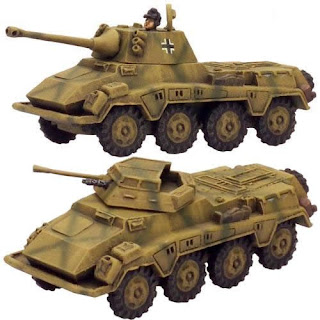 Wiki info: The combat experience of the existing 8-wheeled armoured cars during the German invasions of Poland and France, indicated some deficiencies in the current design. Therefore, in August 1940 an improvement program was started, based on a new set of requirements learned from these combat experiences. The result was the SdKfz 234.
Developed from the Büssing-NAG SdKfz 232, design of the Sd Kfz 234 began in 1940. It was to have a monocoque chassis with eight wheels, like its predecessors, and an air cooled engine for use in North Africa.
Chassis were built by Büssing-NAG in Leipzig-Wahren, while armoured bodies were provided by Deutsche Edelstahlwerke of Krefeld and turrets by Daimler Benz in Berlin-Marienfelde andSchichau of Elbing, with engines from Ringhoffer-Tatra-Werke AG of Nesseldorf.

Potracted engine development meant the desert campaign was over before the 234 arrived, but it nevertheless proved useful on the Eastern and Western Fronts.It was quite formidable, but not many were built before it was replaced by the simpler 234/1, with a 20mm gun, in 1944.