Happy Back to the Future Day! 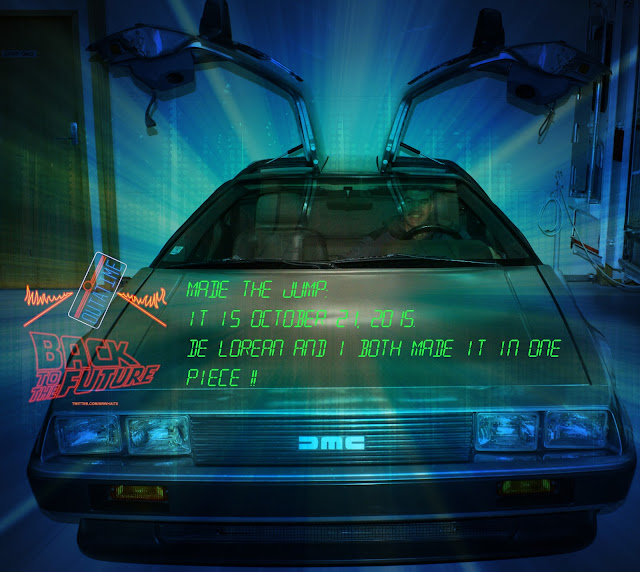 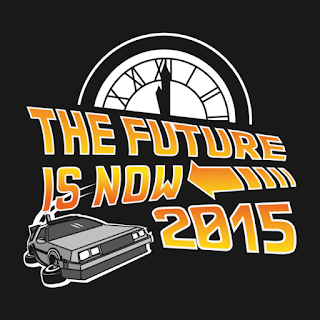 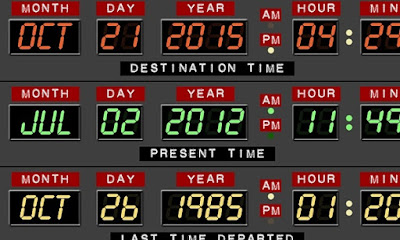 Not Photoshopped. I was allowed to sit in the Southward Car Museum's De Lorean.
Its not what you know. It's who you know... 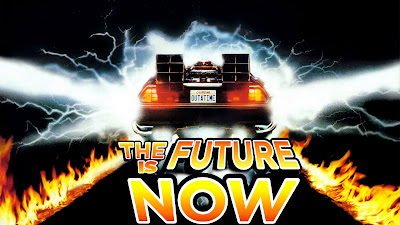 Posted by Herman van Kradenburg at 16:16 No comments:

Email ThisBlogThis!Share to TwitterShare to FacebookShare to Pinterest
Labels: 2015, 21, Back, Day, De Lorean, future, October, the, to 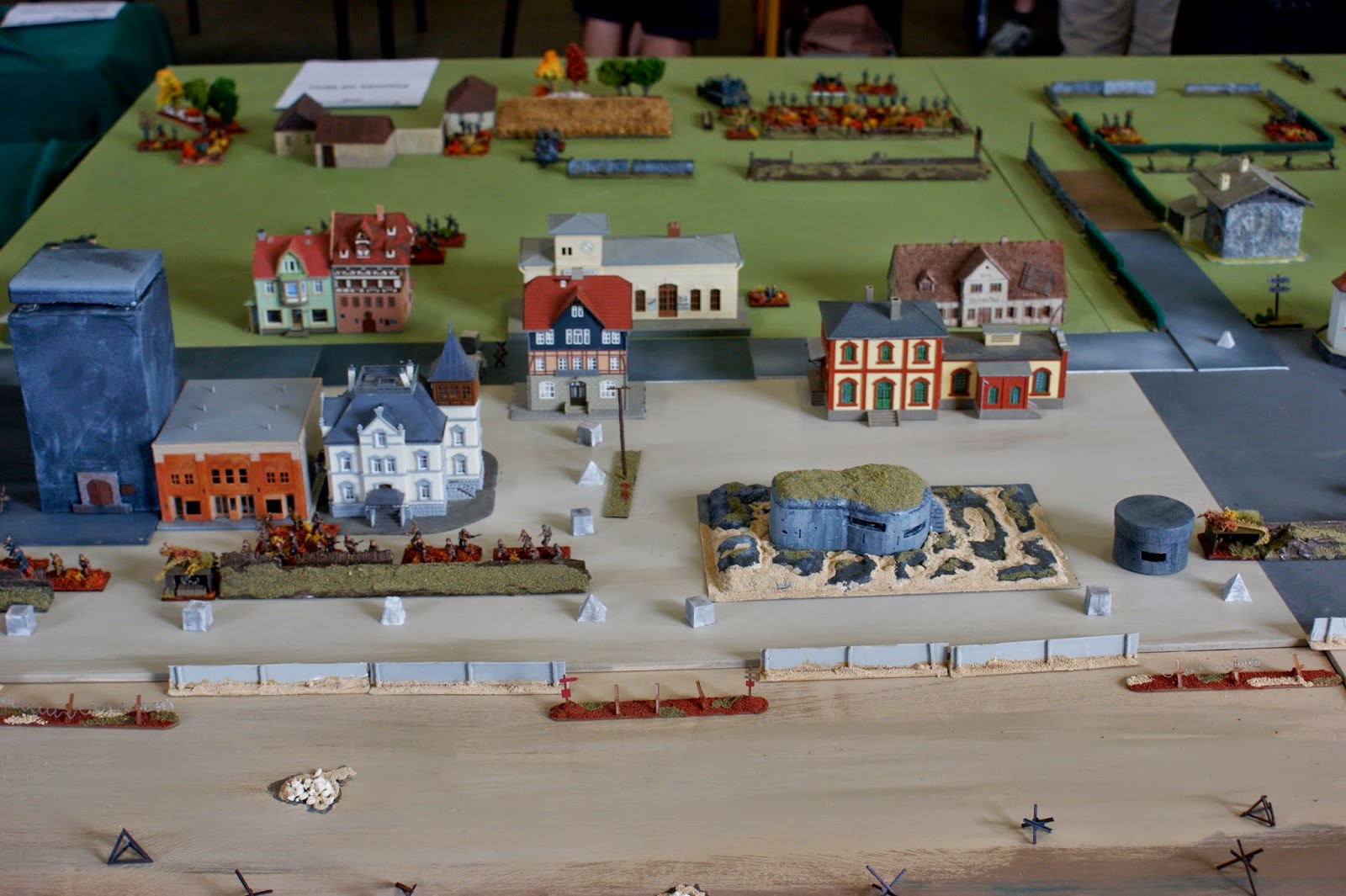 An uneasy dawn broke over Lion-sur-Mer in Normandy. It is 6 June 1944. English and Americans ships had bombed the area significantly since midnight...

Surely they would not launch an attack in such foul weather. Surely this is just a diversion, as everyone knows their attack will come at the Pas de Calais...

At 0300, the Allied air forces bombarded the German beach defenses for the final time before the amphibious invasion. A few hours later, British warships bombarded German gun batteries and other strong-points along Sword Beach. At daybreak, British destroyers closed in and fired at short range. At 05.10 hours, Royal Air Force aircraft laid a smoke screen to shield the invasion force, but the smokescreen was used by boats of the German 5th Torpedo Boat Flotilla to attack, firing 15 torpedoes and scoring one hit, sinking the destroyer Svennert.

Sword Beach from the Air at low tide

Wildcards: Both teams rolled an extra +1 to reinforcement rolls for armour.
The winner would be the Army that held the objectives (Bella Riva Casino/Observation tower) and Road to Caen.

As the landing craft closed, LCT(R) vessels fired a total of 1,064 5-inch rockets, knocking out some beach obstacles, 2 troop units of infantry. Shortly after, at the range of 7,000 yards, self-propelled guns of the UK 3rd Division began to fire from their vessels to knock out beach obstacles.

At the distance of 5,000 yard to the beach, 40 duplex-drive Sherman tanks of the UK 13th/18th Hussars were launched; historically 31 of them would make it to the beach successfully. By this point, all German guns were firing at the landing craft, and the Allied formation began to break up...
The D-day assault on Sword Beach was in full swing 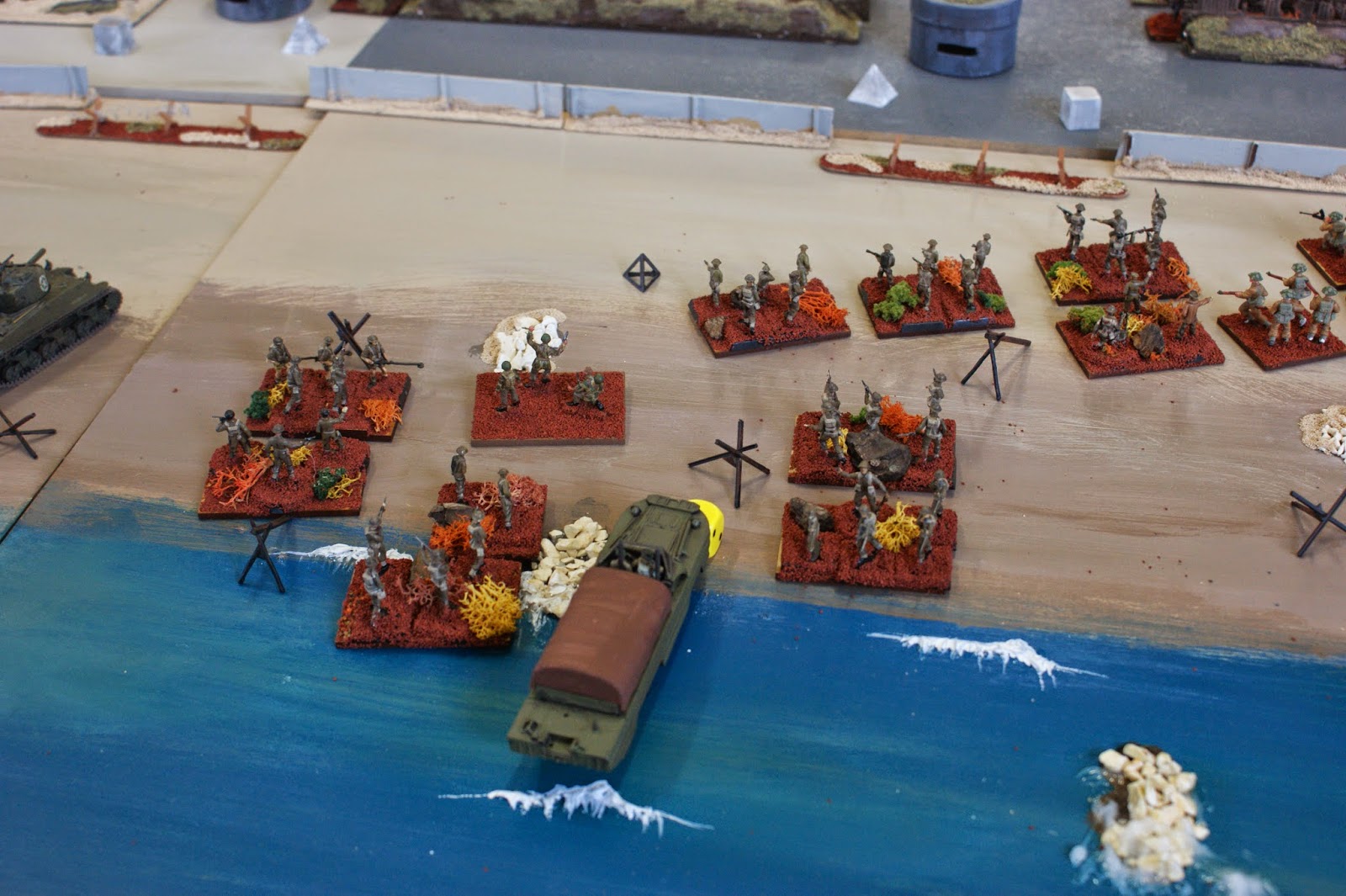 07.25 hours, the infantry arrived on the beach, which quickly attracted fire from machine guns and other small arms. The UK 2nd East Yorkshire sappers which landed on Queen Red sector, experienced a tough fight as they attempted to dash across an area bombarded by 88-millimeter and 75-millimeter guns inland, while being raked by HMG and LMG machine gun fire.

The Germans returned fire in their turn, and picked off a surprising number of English command teams. It may be due to the fact that many wore their officer's caps and carried swagger sticks, making them easily identifiable to the German gunners.

Turn 2:
Shortly behind the initial wave were 24 landing craft carrying British Royal Marine commandos. The commandos landed on the extreme western end of Queen White sector and moved toward the German strong-point at Lion-sur-Mer, which would serve as the link-up between Sword and Juno Beaches. The first target of the commandos was the casino at Riva Bella, which had been turned into a formidable fortress of interlocking bunkers, trenches, wire entanglements, and minefields, and housed the German HQ.

Leading the attack on Riva Bella was French Captain Phillippe Kieffer, commanding officer of two groups of French commandos attached to the British Royal Marines, thus making this attack a purely French effort. Kieffer attacked Riva Bella at two locations from the rear with small arms, personal anti-tank weapons, and grenades, but the commandos were soon stalled by the German defenses proving to be difficult for Allied weapons to penetrate, with well dug in infantry. (Objective 1)

Kieffer found a duplex-drive Sherman medium tank, and persuaded the tank to assist the assault on Riva Bella. The Sherman tank failed to knocked out the defenses, trapping the commandos on the beach, exposed to a cross-fire between two pill-boxes. (Contrary to the real history) 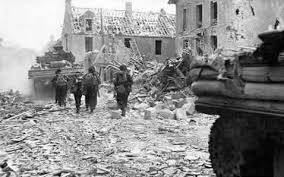 To the east, British commandos attacked the German gun battery at the mouth of River Orne from the sea, in an attempt as ill-fated as the Dieppe raid. (More about that in a different post.)

Machine gun nests, tank traps and minefields protected the battery. In the center of the battery was a 56-foot high concrete tower that housed the control and ranging equipment for the coastal guns; though not a defensive structure, German troops made effective use of the tower's height to observe British movements to relay down to the defenders on the ground, meanwhile throwing grenades down at close-by British commandos as opportunities presented.This gun battery, with its concrete tower, would remain in German control for a days to come. (Objective 1) 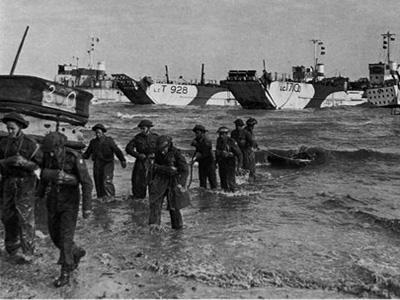 The German battery at Hermanville-sur-Mer received the co-ordinates for the beaches from the observation tower, but to their dismay found that their shells fell short, and failed to inflict any damage on the enemy.

Only the coastal defense 88mm and 75 mm guns were able to put some Shermans out of action and pin the sappers down. A bitter lesson learnt - make sure your artillery is within striking range of the target! 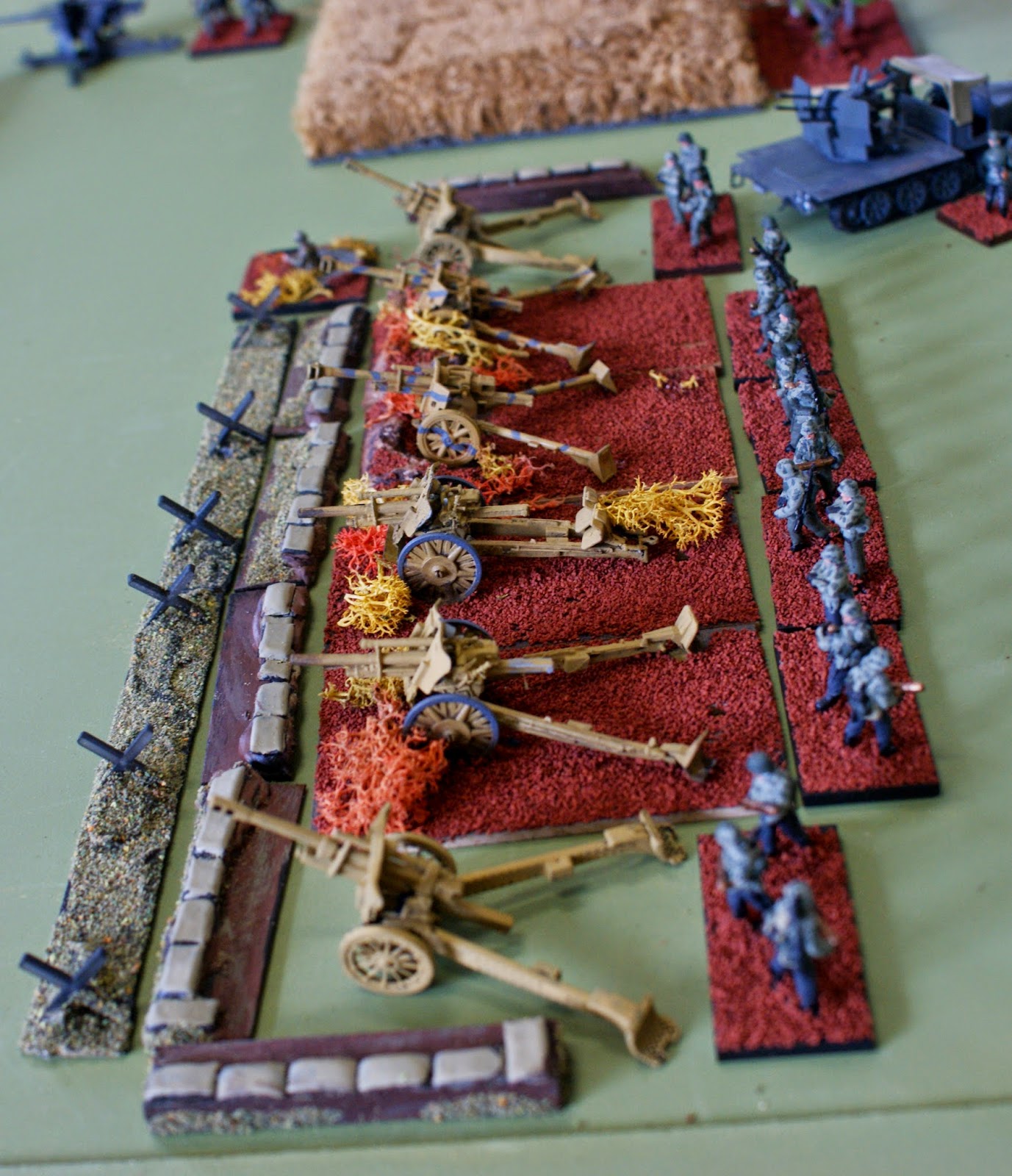 Heer Artillery: LeFH18 with 20mm Quad Vierling mounted on half-track: The initial landings were out of their range, and they could but idly wait for Allied forces to move to within striking range. 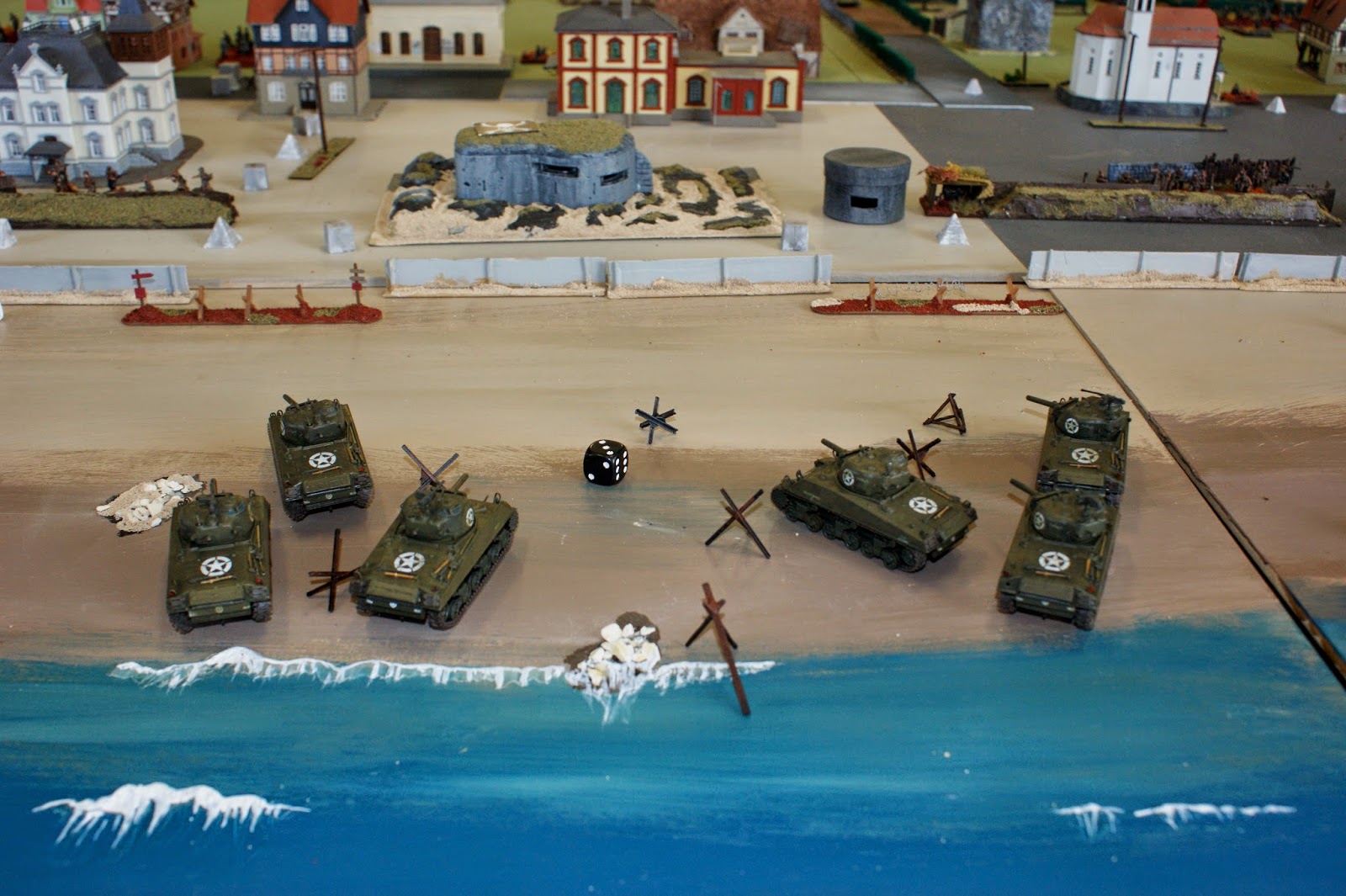 Second Wave: More Sappers and LCTs disgorging  M4 Shermans. These were eventually successful in destroying the pill-boxes, but not the concrete enfilade bunker. A high cost was pain by the sapper units, particularly amongst their officers. Thank goodness for the British Bulldog rule and the good ol' NCOs. Lesser men would have crumbled. 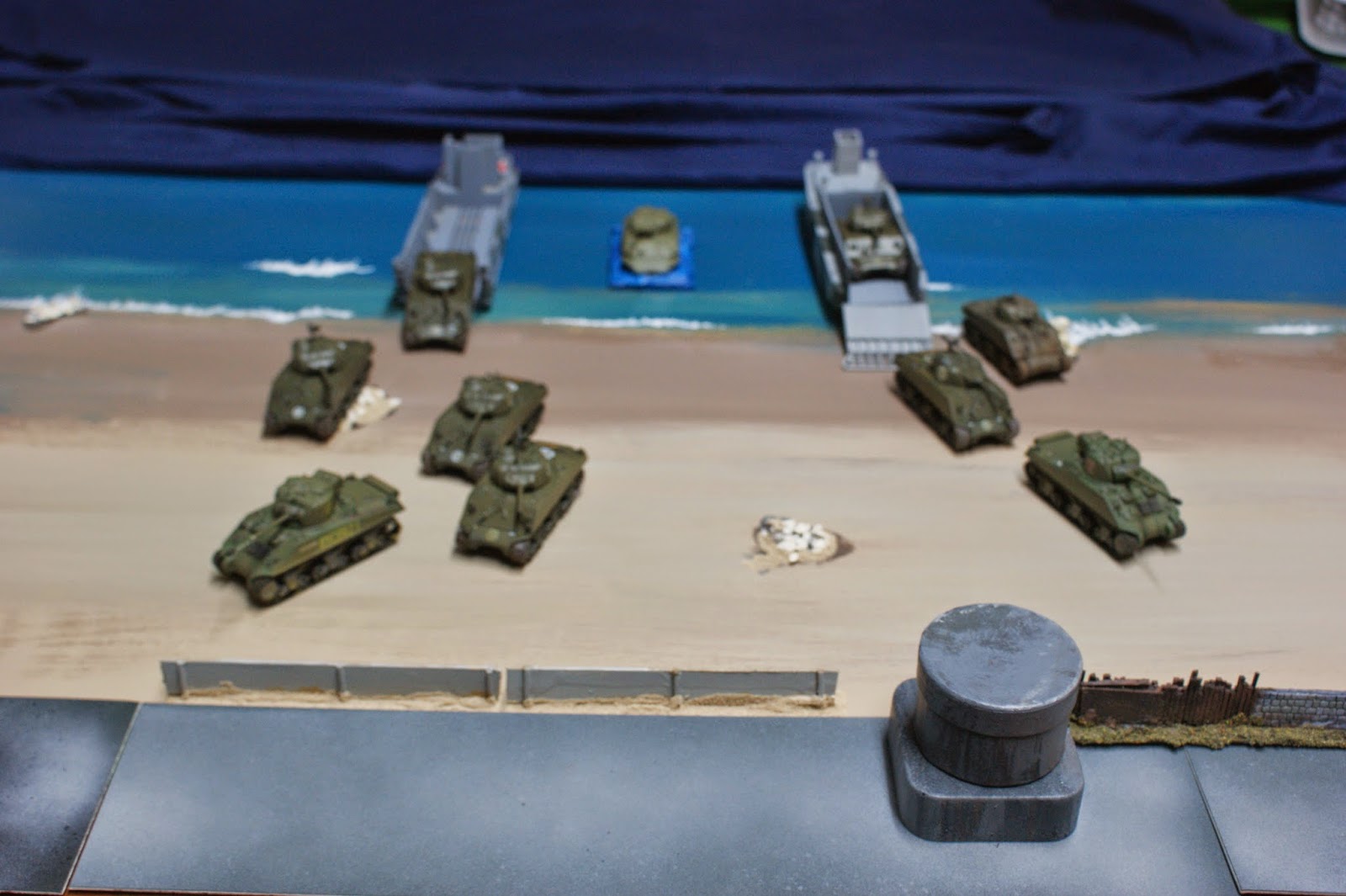 Turn 3 saw yet more troops land, this time with mortars. The heavy weapons proceeded to rain destruction on the 716.Inf Div troops, who took shelter, and survived the onslaught dug into their trenches. A Typhoon flight took out numbers with their rockets in 2 separate attacks in turn 1 and 3, but were apparently intercepted by the Luftwaffe in turn 2. There was no German aircraft to be seen whatsoever. The Allies had complete air superiority. The huddled troops in the embankments paid the price. But there was no-where to run too. Feldmarschall Rommel's displeasure would be worse than any Tommy's bayonet!

Turn 2 saw Oberst Leutnant Fischer's 21.er Pz Div Stugs arrive. They barrelled down the road towards Lion-sur-Mer, but diverted towards Ouistreham when the radio message was received that the bridges and lock over the Orne River was under attack from Allied airborne and commando troops.

The defense of the coastal towns was thus left to the gun emplacements and dug in infantry.
Word had also been received from the east, where it Pz IVs were ready to engage the enemy. 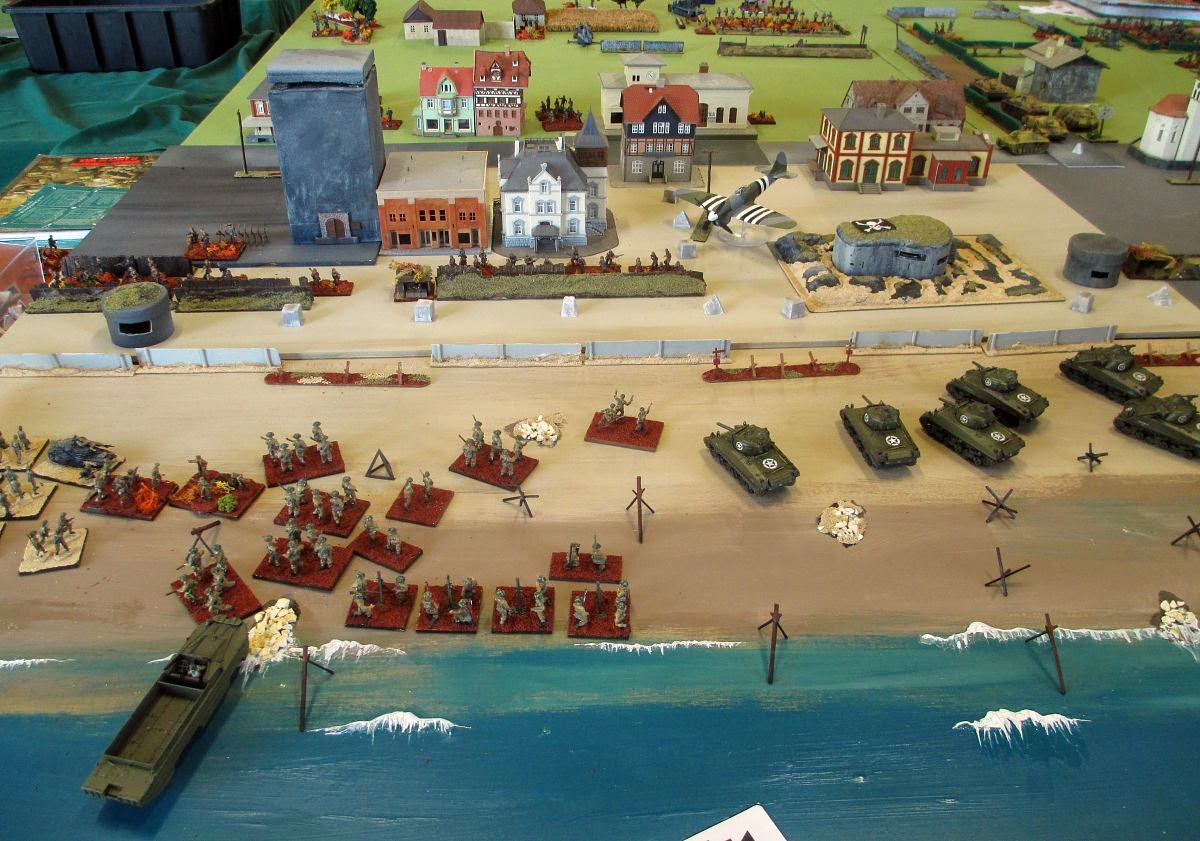 Photo Roly Hermans
Typhoons unleashing 60 lb rockets on the dug in 716. Inf. Div:
A payload equal to that of a Lancaster bomber!
The 21.er Pz Div Stug Abteilung decided to detour to try and counter the Paratroop attack on the Orne river. The commando teams landed to the left were decimated by accurate and sustained Spandau fire from the pillboxes, and failed to reach their objective, despite assistance from the DD Shermans 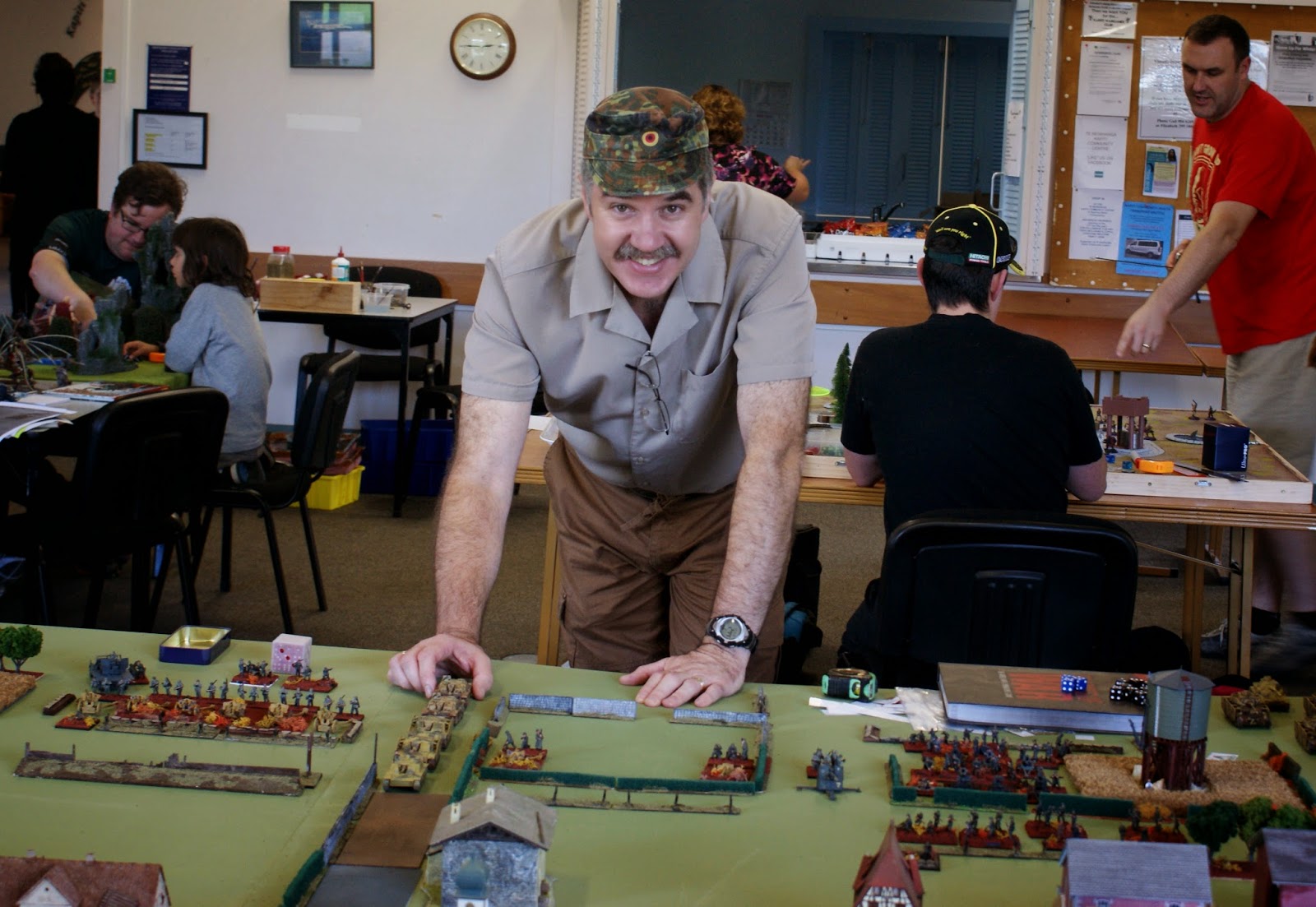 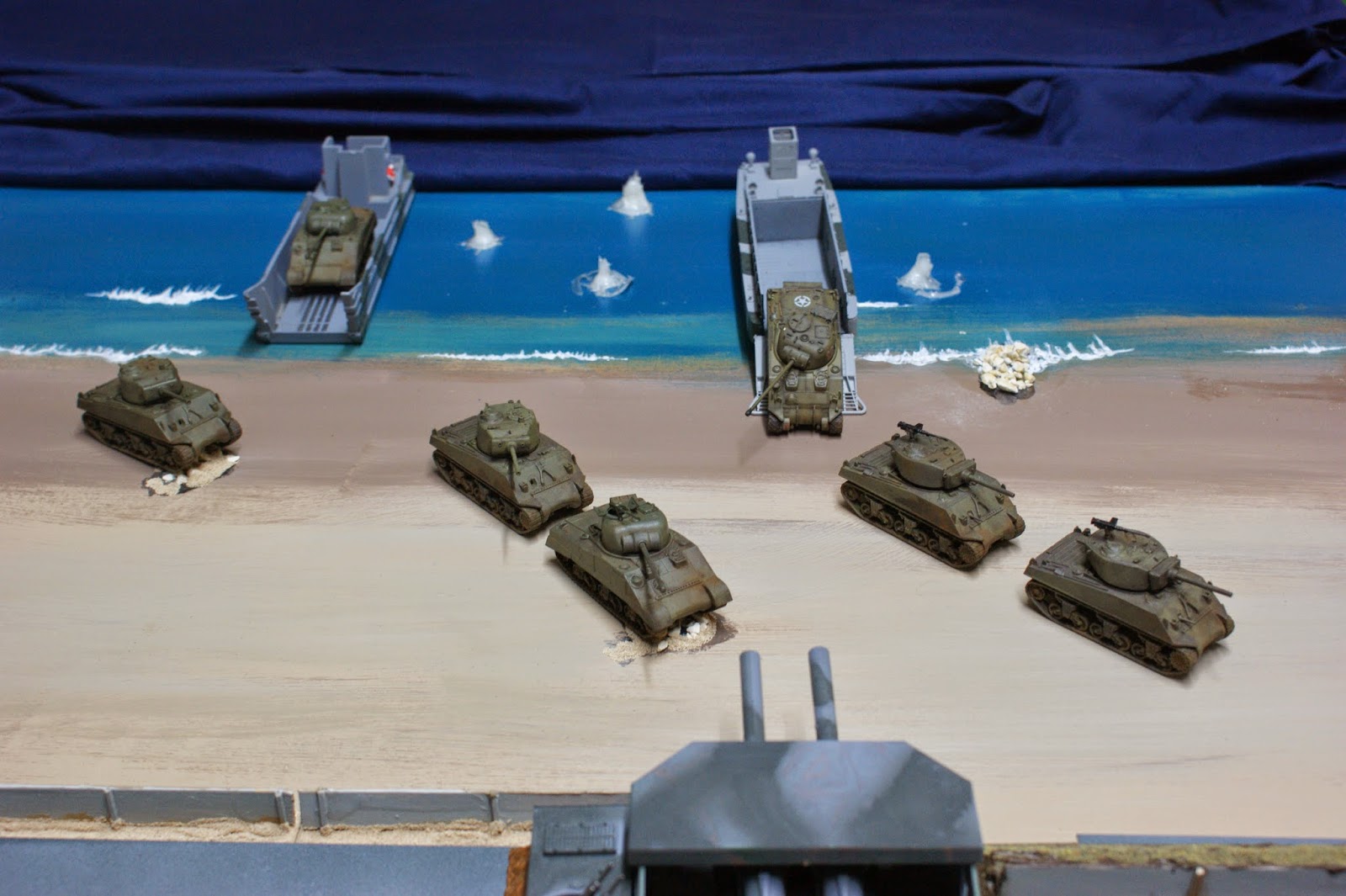 All too soon dusk fell, and we had to call and end to the battle. The invasion forces were still firmly trapped on the beach. Mine fields, tank traps and barbed wire had prevented the tanks from making inroads, and the sappers had failed to clear the defenses.
The Commandos were left leaderless, with Kieffer himself succumbing on the sand.

Both objectives were still in German hands. Had the battle had continued for more turns the tide would eventually have turned, but in this alternative battle the German forces were the victors.