I recently played a few games with the rules for The Men who would be Kings and also had a look at Warlord's Black Powder, and also their Zulu Wars supplement. Having already built some Victorian Brits for the Sudan Campaign (another of Victoria's colonial wars); I was keen to expand my British colonial forces, and, of course they would need some opponents other than just the Mahdist Ansar...
Invested in Warlord, Perry, North Star and Empress figures.
The Anglo Zulu War (AZW) of 1879 is one of the extraordinary "little wars" of Victorian history.

Many people are aware of the battle of Rorke's Drift - made famous by the films "Zulu" (1964, Stanley Baker and Michael Caine)  and " Zulu Dawn " (1979, Peter O'Toole and Burt Lancaster) , but they are not as aware of the Battle of Isandlwana, fought earlier on the same day, 22nd January 1879.
In fact, the defense of Rorke's drift raged through the night and on into the next day, 23 January 1879. 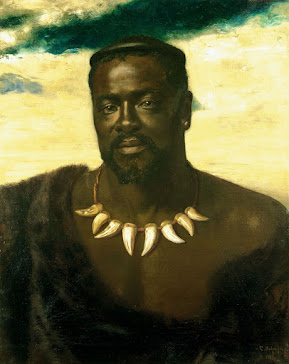 Cetshwayo kaMpande, the Zulu King
Cetshwayo's impi dealt the British empire a bloody nose that constitutes the greatest defeat of the Brits at the hands of a native/ indigenous force ever. Rorke's drift was a bit of a face-save, if you like.
A lot has been written about Cetshwayo and Chelmsford, but in fact, neither was on the battlefield on the day. In the vernacular,  they were the commanders-in-chief, so it was "their" armies that faced off on the day. Chelmsford was the strategist of the broader attack on the Zulu kingdom. The only time they really squared up as commanders was at the Battle of Ulundi.

52 British officers and 806 non-commissioned ranks were killed at Isandlwana. Around 60 Europeans survived the battle. 471 Africans died fighting for the British. Zulu casualties have to be estimated and are set at around 2,000 dead either on the field or later from wounds. The Zulus captured 1,000 rifles with the whole of the column’s reserve ammunition supply.

The AZW war also brought an end to the Napoleonic dynasty with the death of the Louis Napoleon, the French Prince Imperial at the hands of the Zulu, and brought down the incumbent British Government. I've written a separate post on the Prince Imperial's demise.

Being of both British and Boer descent,  the history is close to my heart. In some ways it was a a pre-able to the Anglo-Boer wars, which are also of great interest to me. My ancestors also faced the might of the Zulu impi, but also that of the British empire. 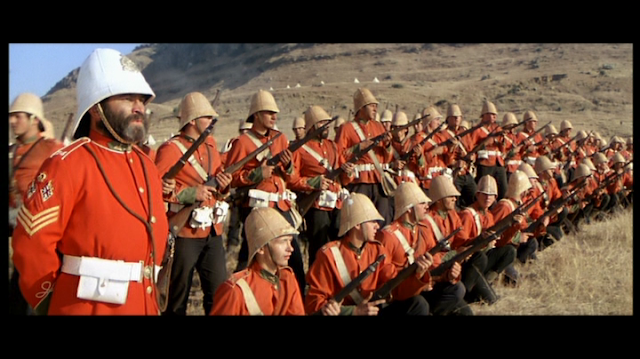 My paternal grandmother was from the Eastern Cape, where many of the colonial volunteers came from. My wife's great-grandfather on her father's side, Willem Cornelis Janse van Rensburg, was the 2nd President of the ZAR (One of the Boer republics, after the Voortrekker leader Andries Hendrik Pretorius; but before the more famous Paul Kruger) Her maternal grandmother was actually disowned for marrying an Englishman, as some of her siblings died in British concentration camps in South Africa.
My father and grandfather could speak both Xhosa and isiZulu fluently. I am only able to converse in basic Zulu, but  was once able to conduct a medical examination in isiZulu. My vocabulary, however, is fading fast after 20 years of living in New Zealand. 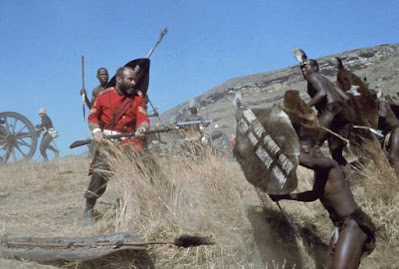 However, the words of Johnny Clegg's " Impi" ring in my ears as I research and write.
Couldn't help but stream it in the background:

Impi! wo 'nans' impi iyeza
Obani bengathinta amabhubesi? (Warriors! The battle is coming! Who dares to fight the lions?)
All along the river
Chelmsford's army lay asleep
Come to crush the children of Mageba
Come to exact the realm's price for peace
And in the morning as they saddled up to ride
Their eyes shone with the fire and the steel
The general told them of the task that lay ahead
To bring the people of the sky to heel
Mud and sweat on polished leather
Warm rain seeping to the bone
They rode through the season's wet weather
Straining for a glimpse of the foe
Hopeless battalion destined to die
Broken by the benders of kings
Vain-glorious general and Victorian pride
Would cost him and eight hundred men their lives
They came to the side of the mountain
Scouts rode out to spy the land
Even as the realm's soldiers lay resting
Mageba's forces were at hand
And by the evening the vultures were wheeling
Above the ruins where the fallen lay
An ancient song as old as the ashes
Echoed as Mageba's warriors marched away...

The Zulu war was precipitated by Sir Henry Bartle Frere in 1879 who was spoiling for a fight against the Zulu Kingdom; an independent sovereign state in Southern Africa, until then actually recognised by the British Crown.

The British army was led across the Tugela river by Lord Chelmsford and the Anglo-Zulu war resulted in one of the most bloody wars ever to take place on South African soil. 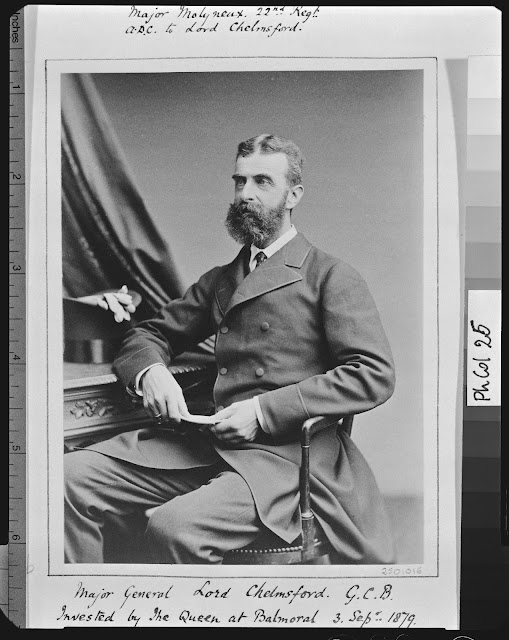 Lord Chelmsford
Chelmsford split his force into three columns. He planned to surround the Zulus and force them into battle before capturing the royal capital at Ulundi.
The right column crossed into KwaZulu near the mouth of the Tugela River to secure an abandoned missionary station at Eshowe as a base. The left column entered Zululand from the Transvaal and made for the town of Utrecht.
Finally, the centre column, led by Chelmsford himself, crossed the Buffalo River at Rorke's Drift mission station to find the Zulu army.

The Zulu King and military leader was Cetshwayo kaMpande, (son of Mpande) who ruled the Zulu Kingdom from 1872 to 1879.  He fielded an army of forty thousand to sixty thousand men. His brother, Dabulamanzi was the supreme commander of the Zulu army. 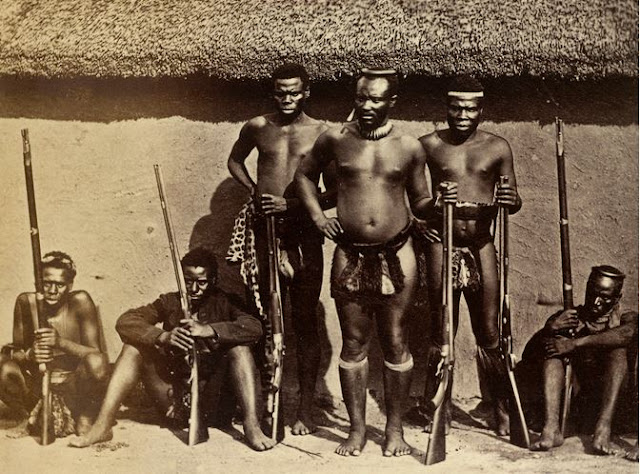 Dabulamanzi kaMpande
Frere issued an ultimatum to Cetshwayo, without the permission from the British Government, and then ordered the invasion of Zululand when Cetswayo ignored it. This invasion was led by Lieutenant General Frederick Augustus Thesiger, Baron of Chelmsford.

The battle for Rorke’s Drift started on the very same day as the famous Battle of Isandlwana. 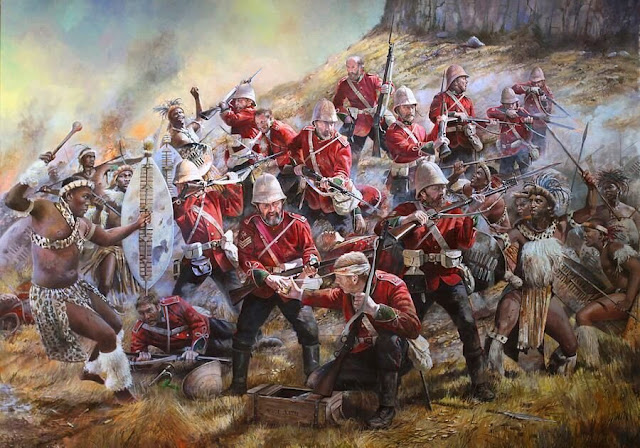 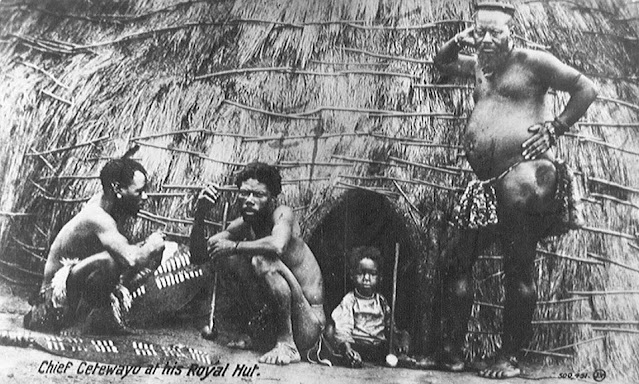 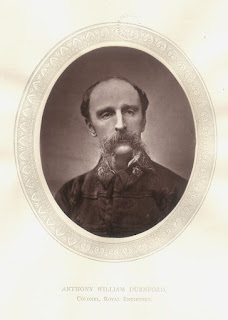 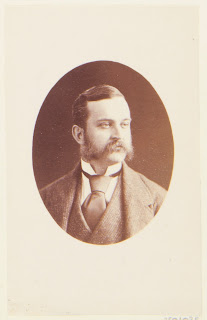 The British commanders were Lieutenant colonel Anthony William Durnford and Lieutenant Colonel Henry Pulleine. The invasion column was all but completely wiped out at Isandlwana . 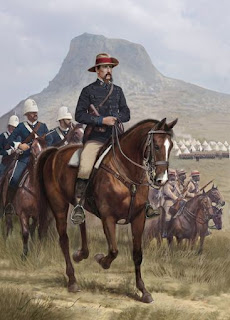 The Battle of Rorke’s Drift took place at the Tugela River in Natal, South Africa. The British commanders were  Lieutenant Gonvile Bromhead and Lieutenant John Chard.
Prince Dabulamanzi kaMpande, commanded the Zulu army. The Brits were victorious despite overwhelming odds. The battle is immortalised in literature, legend and on celluloid. 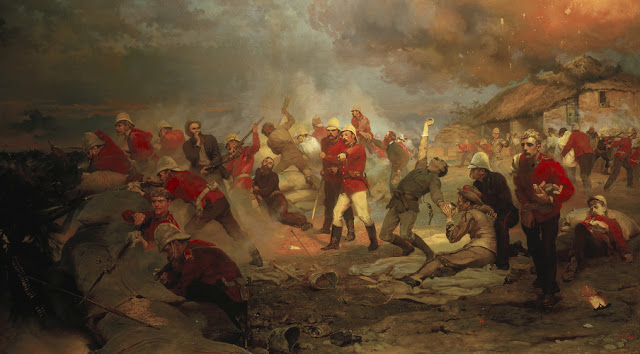 Khambula,  29th March 1879: Northern Zululand. Ntshingwayo kaMahole commanded the Zulu warriors faced by Colonel Evelyn Wood's column of the army. Despite the British forces being demoralized by their defeat at Isandlwana battle, they prevailed at Khambula. The British thought this particular battle to be their turning point in the Zulu war.

Cetshwayo had greater numbers of rifles and out-dated muskets at Ulundi, and hoped this would bolster his army. These weapons were often of poor quality, ammunition in short supply, and when used by with Zulu warriors not trained to use these guns, quite ineffective. Compare that to the British forces who were professional and trained soldiers, well supplied, and supported by artillery.

On  28th August 1879, the Zulu king, Cetshwayo was captured and exiled to the Cape colony. 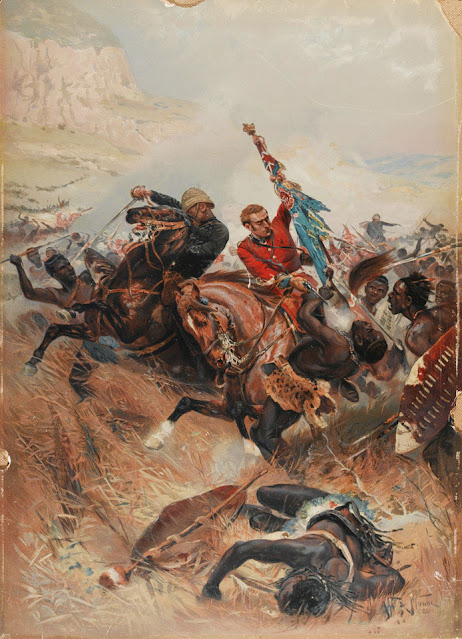 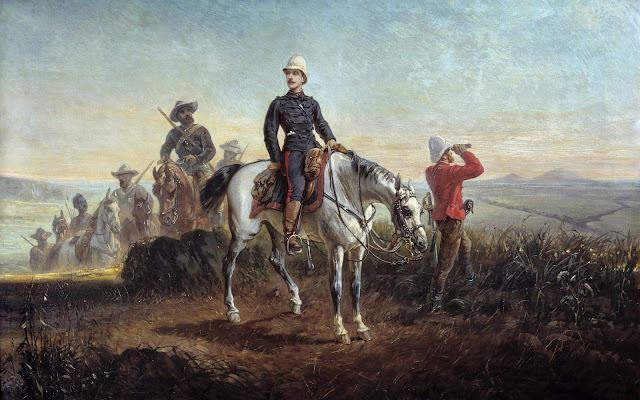 Disclaimer: This article is simply a distillation and interpretation of information and images freely available on the internet, for the purposes of education and entertainment; primarily for a wargaming audience.
I do not own any of the content other than my own interpretations.
This post may contain opinions and distortion of historical facts, and may differ from actual historical fact. Within this context I am happy to correct, acknowledge ownership or even remove content.

Posted by Herman van Kradenburg at 18:42