Falschirmjaeger defeated by Allies at Triomphe-de-Luc.


The KWC had its 2nd open day on 30 June 2013. It was a great success, with many visitors and a range of games being played, from StarWars X-Wing through to the 7 Years'War.

I fielded my 20mm Falschirmjaeger with Divisional support against Luc's Brit Motorised Infantry, again with plenty of support. We played a FoW game, Fortress Europe, with approx 2800 points a side. 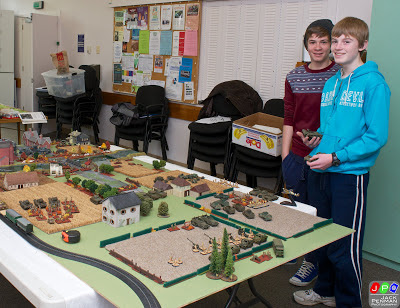 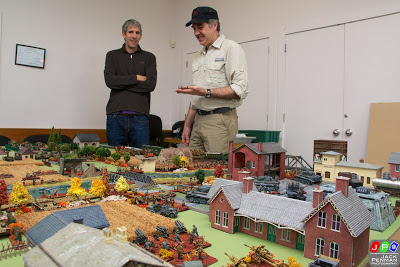 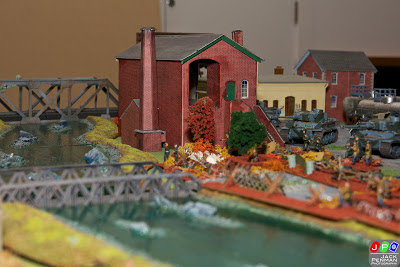 Being mostly a display game we though to load the table (which was probably too small for the scale of the game and number of points) with models. 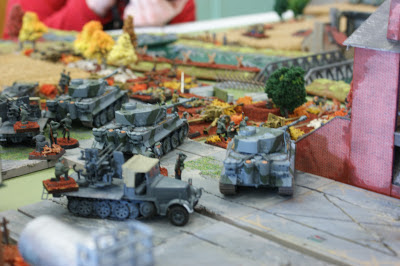 My Falschirmjaeger were garrisoned in the town of Armandville (Hermanville in German), a town in France, defending across a river, with three access points, a road bridge, a rail bridge at the west and ford to the east. The Falschirmjaeger were well dug in, with 4 heavy machine-guns in Tobruk pits, light mortars, a battery of 4 Nebelwerfer and a battery of 2 LeFH 18 Howitzers supplied by Divisional Command. 4 Tiger Panzers and 4 PAK 40s were holding the village square and access to the Scientific research station and fuel dump in the Industrial area at the North end of the town.Reinforcements by rail in the shape of 3 PzKfw IVs has been promised, and the Luftwaffe supplied sporadic air support. A troop of Falschirmjaeger were also arriving as reserves from the neighbouring village. 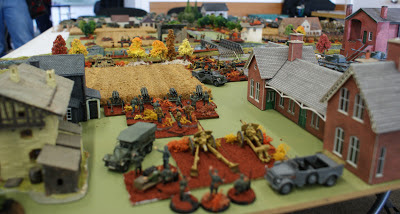 View to the South: Nebelwerfer and leFH 18s

The ford at the south was relatively weakly defended, by 4 LMGs and supported by 2 Stug Gs

Reserves were deployed in a random fashion, arriving from a table edge designated by the roll of the dice, and on a roll of 6 in the first turn, 5 in the next, 4, etc, etc.

The Brits deployed in pincer fashion, with 3 Churchills leading the charge, followed by 6 M3 Halftracks, each with 2 50 cal machineguns. The Brits deployed  six x 6-pounders towed by universal carriers, backed up by 3 Sherman 75s on the other flank. The centre was held by 4 shermans led by a firefly gun-tank.The Royal engineers raced towards the railway line, set on destroying this avenue of resupply for the German garrison. Australian Field artillery in the shape of 4x 25-pounder guns provided bombardment clout. Of course, RAF  typhoons provided priority air cover. 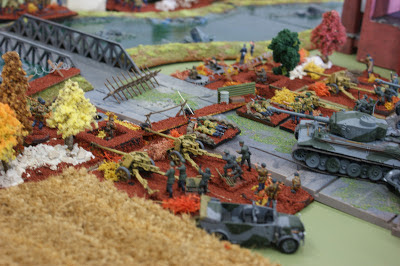 The German garrison rolled to have the first turn, essentially stayed put, maneuvred to get better line of sight of the approaching forces. Only the nebelwerfers and 105mm Howitzers were in range. The Stukas arrived, and delivered death to 2 squads of the Royal Engineers attempting to blow up the railway line.


The Nebelwerfer took out two bren carriers with their 6pdrs still in tow. The LeF18s took care of 2 of the 25pdrs. The Falschirmjaeger watched, and waited... 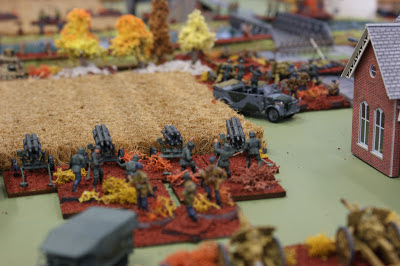 The 25 pounders found their mark on the StuGs and supporting infantry, killing several MP34 teams outright, but failing to damage the StuG or the Horch Field Car of their unit commander. The Churchills, Shermans and M3s closed in, attempted to take out the artillery observation teams, but failed at this.The typhoons arrived, but were seen off by the quad vierling AckAck batteries. The UK units who had not fired yet then laid down a massive smoke screen across the road bridge, obscuring the view of all but one of the Tigers, all of the Pak 40s and all of the Tobruk pits. A very tactically sound move by Brigadier Luc! 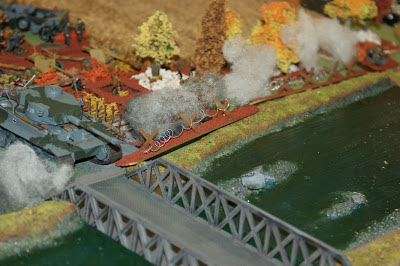 Turn 2 saw the StuGs advance through the ford, one Tiger probe the smoke screen, and take possession of the road bridge. The advancing allied infantry were now within range of the stummelwerfer mortars, who rained oblivion on the advancing Tommies. 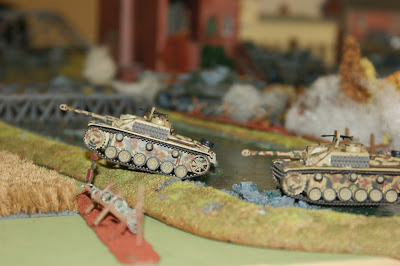 The Tiger supporting the Company commander fired at extreme range,but the 88mm kanone failed to damage the advancing Churchills. The reinforcements from Ville d'Jeanette arrived on the East side of the board, and reinforced the advancing StuGs. The Nebelwerfers ranged in, but failed to do any damage, and the LeF18s destroyed one more of the 25-pounders. The StuGs destroyed another 2 of the 6-pounders, now unlimbered, leaving one only, who found that discretion was the better part of valour. 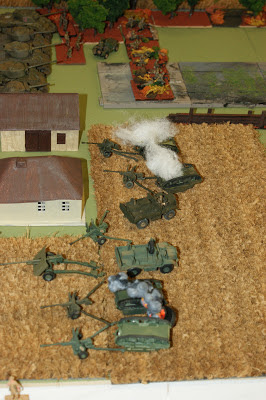 Turns 1 and 2: Result of the Nebelwerfer salvo and Stug Fire

The smoke screen laid down by the Tommies prevented any further significant action, and the Stukas were driven off by the infernal RAF! 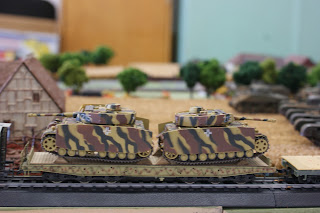 PzKfw IVs on rail cars, never made it to Armandville due to Royal Engineer action 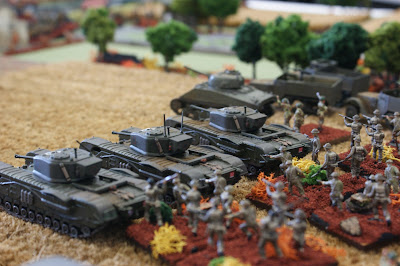 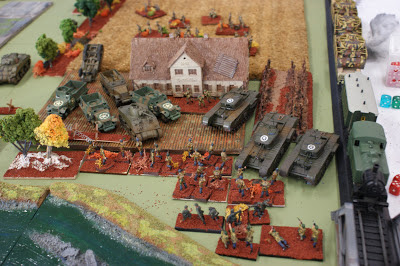 The M3's charged forward, decimating the Falschirmjaeger dug in on the river bank. The MGs on the Churchills and Sherman adding to the annihilation of my elite troops. 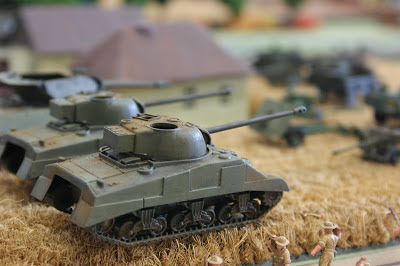 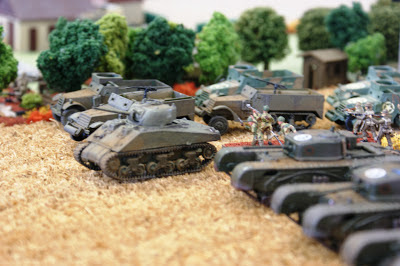 He rolled for his reinforcements, and they arrived in the rear of the German Forces! 5 M10 Tank destroyers rumbled into the town. 2 took the fuel depot and 3 ground their way into the square.

The Tigers stood no chance! 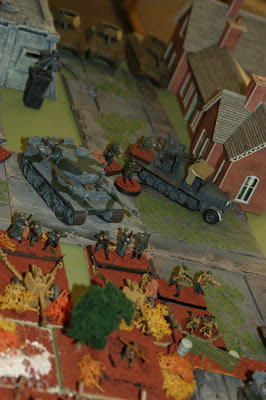 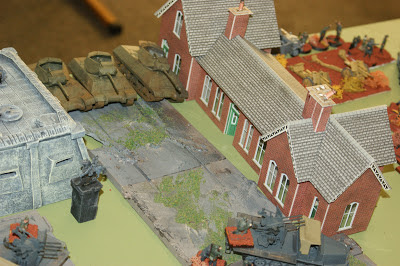 Volley upon volley of AP rounds crashed into the unprotected rear of the Tigers, destroying 3 outright! The Shermans and Churchils poured their fire onto the remaining Tiger, positioned on the bridge and scored several hits. The Tiger failed his armour save! 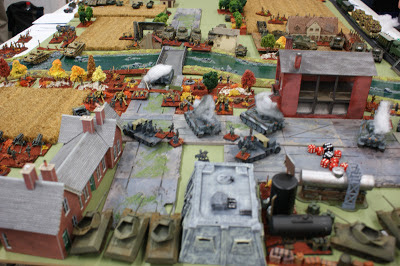 Caught in a vice, with their armour gone, and the fuel dump (Objective)  in British hands, the decimated Falschirmjaeger had no choice but to surrender. 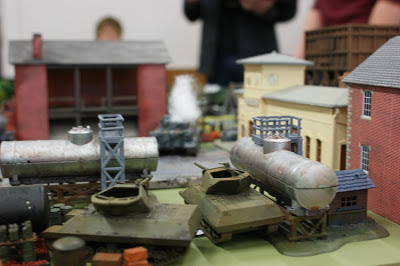 The towns-people rejoiced, and renamed the town of Armandville to Triomphe-de-Luc in recognition of the deeds of their Liberators. 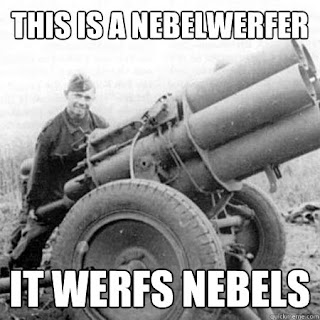 Posted by Herman van Kradenburg at 02:02